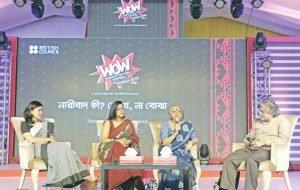 Staff Repoter :: Feminists do not seek superiority over men. It seeks equality between men and women’

On Saturday, feminist activists of Bangladesh dispelled myths and misconceptions about feminism during a panel discussion organized as part of the Women of the World Festival.

The panel discussion, titled “Naribad Ki? Bojha, na bojha (What is feminism? The burden of not understanding),” was held at Bangla Academy.

“Feminists do not seek superiority over men. It seeks equality between men and women,” she said.

She also emphasized the importance of financial empowerment of women, and granting them decision-making power.

“We [women] are taught to live in a bubble since our childhood. Girls are told to wait for their prince charming to protect them, whereas boys are taught to take the lead and make decisions,” Sharmin said.

Describing patriarchy as a dysfunctional system, she added that decision-making power was crucial for women to break free from its restraints.

“Not all men want to conform to macho stereotypes, but many are forced to as a result of the patriarchal social structure. A man can also be a feminist if he believes in equality between men and women in every sphere of life,” she added.

Khushi Kabir further said that feminism demands inclusion, and transgender people should be included in the feminist movement as well.

Panel moderator Alam Khorshed, founding director of Chittagong-based art complex Bistaar, lamented that feminism still needed to be explained, and said discussions like this were necessary to debunk myths about feminism.

Alongside the panel discussion on feminism, a self-defense workshop, career counseling workshop, film screening, puppet show, and art exhibition were organized on the closing day of the two-day long festival.