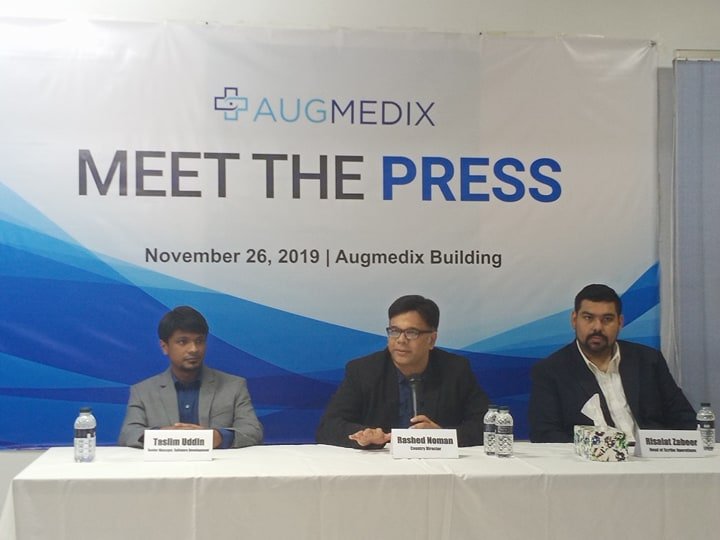 Staff Repoter :: Augmedix has raised a foreign investment of 19 million US dollar as Series B of venture capital funding, a top official of the start-up said.Augmedix Bangladesh Country Director Rashed Mujib Noman made the breakthrough of investment at press meet at its head office in capital’s Panthapath on Tuesday.

The San Francisco-based venture turns natural clinician-patient conversation into medical documentation, in real-time, so that clinicians can focus on what matters most–patient care.The funding comes from some of the largest tier-1 Silicon Valley investors such as Redmile Group, McKesson Ventures, DCM Ventures, Wanxiang Healthcare Investments, according to the official.Earlier the start-up has raised $ 60 million in the first six years of founding, according to latest announcement made in February 2018.

Bangladesh-born young entrepreneur Kazi Ian Shakil founded the Google Glass-based start-up which allows patient documents to be entered into the US government-mandated electronic health records (EHRs) without manual data entry by doctors.In reply to media, Rashed Mujib Noman said the main objective of the fund raising is to establish Augmedix as an iconic destination employer for up-and-coming recent graduates.He said that the company will deploy this capital to expand its operations in 2020 and will offer thousands of promising job opportunities for the young graduates of Bangladesh.

Most of these openings will be in the realm of “tech-enabled medical scribes” and the company plans to double its in-country employee base in the next 18 months, Rashed Mujib Noman briefed about the execution of the investment. “To achieve this, Augmedix has leased additional new office facilities in prime locations in Dhaka, Bangladesh in its pursuit to boost its country-wide recruitment programs,” he added. Augmedix provides clinicians with hardware, Smartphone or Google Glass, to securely stream the clinic visit to its cloud-based platform.

The firm aims at providing competitive cash compensation to the employees with an attractive benefits package, officials informed. Rashed Mujib Noman also mentioned that the start-up has opened mission-driven ‘Silicon Valley’ style culture as Augmedix becomes an institution to learn and advance as part of a global team experiencing hyper growth. For applicants interested in career opportunities relating to tech-abled medical scribing, Augmedix has launched an Android-based pre-screening app so that interested job seekers can take a test to rapidly evaluate their English skills. Augmedix in collaboration with Repto has also launched an online training program so that interested candidates can study at their own pace to prepare themselves for success at Augmedix.

The Augmedix platform is powered by a combination of proprietary natural-language-processing technology and medical documentation expert teams. Tech-enabled remote specialists are a critical part of Augmedix’s operational platform and utilize proprietary automation modules to generate medical documentation that is accurate, comprehensive and timely delivered. The service works with over 25 specialties and supports most EHRs. Augmedix has partnered with over one dozen health systems to combat clinician burnout and increase clinician productivity by more than 30 percent.

Spread the love this Valentine with Aarong

Christmas songs of Mahbubul A Khalid