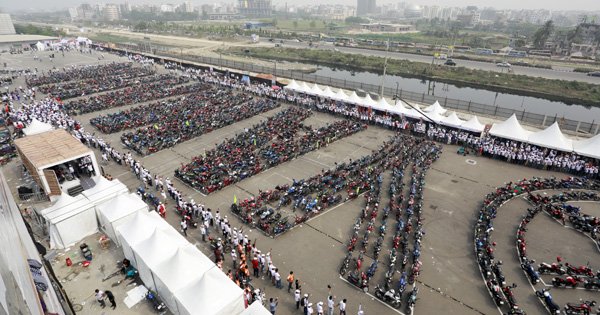 Staff Repoter :: With a view to reducing the number of road accidents, thousands of motorcycle drivers took an oath on the Independence Day to drive carefully.

During the program, the drivers made a new “Guinness World Record” aspects – the biggest “Yamaha Logo” with Yamaha Motorcycle.

A. K. M. Hafiz Akhter, Additional DIG graced the ceremony as its chief guest.
“Bangladesh is transforming herself from the status of an underdeveloped country to that of a developing one. If the wheel of our economy keeps rolling this way, it will not take us much time to uplift ourselves to the position of a developing country. Our young generation has to take the lead in this regard,” said A. K. M. Hafiz Akhter.
Dr. F H Ansarey, managing director and CEO, ACI Agri-Business, Subrata Ranjan Das, executive director, ACI Motors, Taskin Ahmed, Brand Ambassador of Yamaha and a cricket icon and ODI Captain Mashrafi bin Mortiza attended the program.

“We are pleased to note that we have become able to bring so many motorcycle drivers on one platform and to make them pledge that they would drive safely in order to prevent untimely deaths. Spirited with the independence, they will deliver on the promise they have made today,” said F H Ansarey. 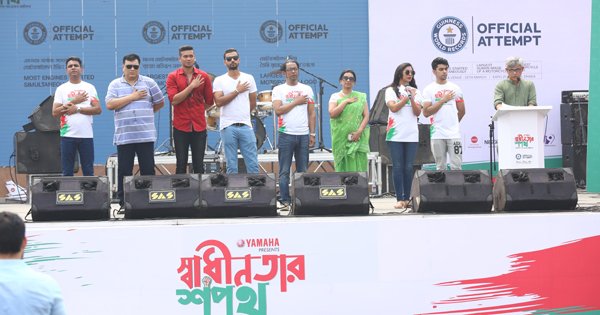 In addition to the pledge made by drivers, the ceremony also featured a daylong cultural program, rocked up by Ayub Bachchu’s LRB band and singer Sajal, and a raffle draw. The first prize winner was awarded a Yahama motorbike, while top ten awardees were offered a trip to Cox’s Bazar.

Organizers informed that motorcycle made life easy thanks to the time it saves and the touch of modernity it provides. Moreover, the motorcycle market is also contributing to the country’s economy.

ACI Motors Limited dedicated this ceremony to Bangladesh’s stride towards the status of a developing country.